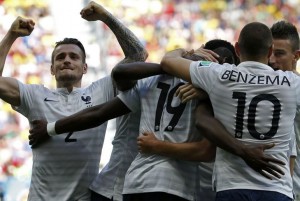 France qualified to the quarterfinals after defeating Nigeria 2-0 in a tough match played at the Mane Garrincha stadium in Brasilia.

In the first time, Nigerians pressed on more than one occasion to the French, who expected and opted for quick counter attacks from Pogba, Valvuena or Giroud.

Lapsing the second half, in the 79th minute after a cross shot and a bad out of Enyeama, Paul Pogba appeared comfortable and with a head shot took the opportunity to open the scoring in favor of the Gauls.

the Europeans continued attacking and at the 91th minute after a shot of Valvuena to the center area, Joseph Yobo mistakenly scored an own goal and sealed the French victory 2-0.

Argentina suffered against Switzerland but qualified for quarterfinals