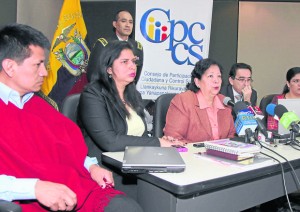 According the Article 70 of the Organic Law of the Citizen Participation Council, the authorities of the Ombudsman´s Office and the Public Defender´s Office, Prosecution, Comptroller General, Electoral Contentious Tribunal, Attorney and Superintendencesmay participate in the relection. But, following the resignation 180 days before the call for the formation of the charges.

A case of this is the Attorney General Diego García who has served for six years. He was designated in April 2008 by the Constituent Assembly of Montecristi, but resigned in December 2010 to integrate the list of the Executive, for a period of four years, which is fullfiled in January 2015.

The Council Participation, according to its member Andrea Rivera, must request the shortlist to President Rafael Correa in two or three months to start the process of public impeachment and choose the new attorney. If the President considers Garcia to serve on the shortlist, he should resign six months before, she said.

Ecuador will transcend on the meat industry

Ukraine resumed offensive against pro-Russian after end of ceasefire