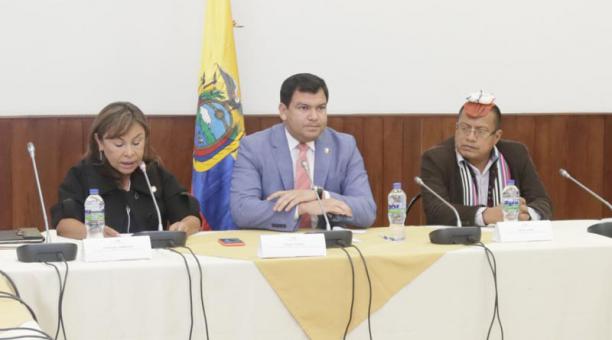 This is the third time that the murder of General Jorge Gabela will be investigated. But it is the first time it will be based on documents that were considered confidential or secret.

Those who will access the declassified documentation will be seven assembly members who since Monday are part of the Multiparty Commission that will study the Gabela case. Their work will last 90 days. At that time they must ensure that the files reach the Prosecutor’s Office and establish the possible motivations for the death of Gabela, former commander of the Ecuadorian Air Force, in 2010.

To fulfill the purpose, legislators delineate the road map that will follow. Jeannine Cruz, member, proposes that the expert Roberto Meza attends the commission and collaborates with the reconstruction of the report that he delivered to the Ministry of Justice in 2013.

In that document, now disappeared, the expert’s conclusion about Gabela’s death is stated: It was a murder and is related to the allegations about the Dhruv helicopters. If this order becomes official, Meza says he will accept, provided that his security in the country is guaranteed. After his visit to Ecuador last month, the expert told yesterday that he received threats and, although they are not clear, he believes that they are linked to his conclusions on this case.

“They called me from a number that only had zeros. In the background I heard a funeral music, “he said from Brazil, where he resides. The expert says he wants to cooperate to establish the truth of the facts. Even the expert already sent to Ecuador a certified copy of the contract on the investigation services that he made around the case.

There are two clauses in which you are expressly forbidden to have copies of the report or to disclose the information you know within the investigation.

In the first investigation, which was made in the Office of the Prosecutor, the material authorship of five persons in the crime was determined. Of these, three currently serve sentences of 25 years in prison and two other suspects, linked to the case as accomplices or accessories, were released.

The second investigation was conducted through the Interinstitutional Committee, created by decree by former President Rafael Correa in 2012. The conclusion of this group was that the death of the officer was the result of common crime. This was stated in 2015 by the then Minister of Justice, Ledy Zúñiga Rocha. Now, in the Legislative Commission, Sebastián Palacios, of Creo, proposes that the appearance of the different authorities “of high, medium and low rank”, who have participated in the Interministerial Committee in the last eight years, should be requested.

He assures that the key to discovering what happened with the document that the expert drew up and finding the original is among the officials who worked between 2013 and 2014.

Ángel Gende, vice president of the legislative Commission, points out that this case requires “an investigation deep to tell the country the truth, no matter who falls.” He proposes that all the reports that are analyzed and elaborated in the interior have a copy, which must be delivered to Patricia Ochoa, widow of Gabela.

It has not yet been defined if she will also be called to the meetings. In addition, it is expected to have a delegate of the Council of Citizen Participation. Dhruv case will be reopened There is still no consensus within the legislative committee on whether the purchase process of the seven Dhruv helicopters, which was opposed by General Gabela, will be reviewed.

For Assemblyman César Rohón, this is an important point that must be analyzed, since the hypothesis is that the former commander’s denunciations of acts of corruption in that bid led to his death. But he clarifies: “we are not researchers”.

Cruz’s idea is to also review the reports on the four helicopter accidents, in which three soldiers died. Today, from 3:30 p.m., the members of this committee will return to session and there will be defined the steps to follow.

From the research work of the expert Meza, new evidence about the crime emerged. A technical team collected consented statements from the actors during the visits to the Guayas Penitentiary.

Through them appeared the names of Derlys David Salazar Vargas or Francisco Israel Cruz Vargas, alias ‘Francis’, as the alleged author of the shot that killed Gabela.

According to the widow, the sentenced are right-handed. “The prosecutor never mentioned an alias Francis. The serious thing is that this person was murdered, “says Ochoa.

The Prosecutor’s Office called to render a version to former Attorney General Galo Chiriboga in the investigation into the death of Gabela. It is about the second time that Chiriboga has been called to appear in this case. The first occurred in 2016, when the legislative commission investigated the purchase of helicopters for USD 45 million.

On that occasion, the then prosecutor was conducting an investigation following the denunciation of legislator Fausto Cobo for possible corruption. The case was filed because it lacked a report from the Comptroller’s Office with indications of criminal responsibility that established some type of damage for the State for the acquisition of the ships. In that time, Comptroller Carlos Pólit, now a fugitive from corruption, said that he only found civil responsibilities. (I)

Ecuadorian floriculturists are sure to achieve Guinness record