Seven extraditables in cases of Petroecuador 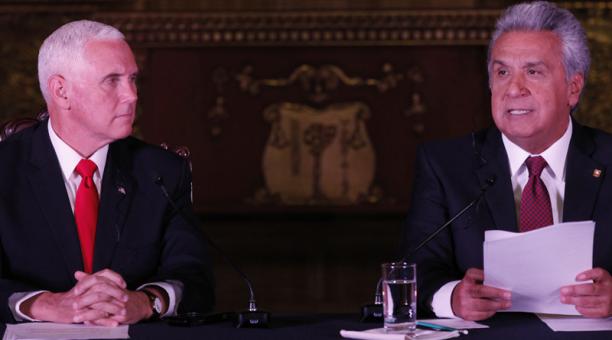 The United States has not responded favorably to any request for Ecuador’s formal extradition since 2003. Since that year, requests have been made to recover Ecuadorian fugitives who would be in that country.

The president, Lenin Moreno, presented on July 28 a list of 44 possible extraditables to US Vice President Mike Pence. In general, Ecuador processes 143 requests for extradition. 111 to other countries and the rest, 32, are requests from another country that requests Ecuador to extradite a citizen who has violated the Law in its territory.

In the list sent by the Government are William and Roberto Isaías, accused of bank embezzlement. In the payroll is also Pedro Delgado, former manager of the AGD Trust-No more impunity.

In addition, Carlos Polit, former Comptroller, for the crime of alleged embezzlement, as well as seven linked to the cases of corruption in Petroecuador. Since May 2016, the participation of public officials in the acts of corruption that occurred in the state oil company has been investigated.

There are also possible indications for the excessive cost of repairing the Esmeraldas Refinery. Although the former Minister of Hydrocarbons, Carlos Pareja Yannuzzelli, and the ex-manager of Petroecuador, Alex Bravo, are in the country detained, there are seven involved who fled.

In response to a request for information made by this newspaper, the National Court of Justice indicates that there is no specific reservation to the extradition proceedings. However, the information contained in the files, referring to red notifications, current location of the requested, is handled prudentially, “because its publication may have negative effects on the efficiency of extradition”.

Ecuador’s extradition request is based on two documents. On the one hand, there is the Extradition Treaty with the United States. It dates from 1872 and was ratified in 1941. It is considered the crime of embezzlement of a person employed, to the detriment of his employer, when the amount of money or the value of the goods exceeds USD 200.

There are also crimes such as malicious destruction or attempt to destroy railroads, bridges, ships, rooms, public buildings, when the act endangers human life. They are also subject to extradition people accused of abortion, “kidnapping or detention of women for immoral purposes”, bigamy … On the other hand is the Extradition Act of Ecuador that was officially published in 2000.

There is established the process: the request must be made only by the Ministry of Foreign Affairs. The president of the court, Paulina Aguirre, confirmed yesterday that they already requested some cases for the Foreign Ministry to coordinate with the United States.

In others, he added, they expect the judges in charge to send all the information. The Court provided general information about the processes. For example, he reported that people who incurred an offense covered by the Organic Comprehensive Criminal Code (COIP), with a penalty of more than one year of deprivation of liberty, are liable to originate extradition.

Among the crimes that are subject to this process are murder, disappearance, embezzlement, illicit enrichment, among others. However, of 44 extraditable cases in the US, five would have legal inconsistencies: two are already prescribed, another because the crime that is tried in Ecuador does not appear in the US laws, another because the accused has already died and finally one in which the requested citizen was already deported, according to a source to which this newspaper had access.

The case for a crime that is not in US legislation is an expoliation linked to enforced disappearance and execution in a pharmacy in Guayaquil in 2003. Another involved in this case, the former police commander Edgar Baca, is also in the list, but he died there. A third case could no longer be processed in the USA because he would have been deported to Ecuador. Two additional cases, however, could not be subject to extradition, because they prescribed the causes for which they were accused.

This is included in article 5 of the current Extradition Law. For the expert in international issues, Joaquín Hernández, this request should be taken with moderation. Separates the political moment of closest proximity between Ecuador and the United States of the legal part that must be fulfilled in that country.

“The Supreme Court of the United States operates according to legal criteria, beyond the political ones.” This Journal asked the Court for detailed information on the cases that were presented to Mike Pence. Last Thursday an interview was canceled and from the institution it was requested to send the questions by email. So far, the complete questionnaire has not been answered. (I)

The ambassador of Ecuador in Spain contextualizes statements about Correa

Floreana is the first territory of the country without straws