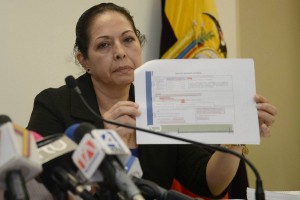 Patricia Ochoa, widow of Jorge Gabela, former commander of the Ecuadorian Air Force (FAE for its Spanish acronym), questioned Tuesday the report submitted by the Minister of Justice Ledy Zuniga last July, concluding that the murder of her husband was by common crime, something she assured “contradicts international expertise.”

In a press conference, Ochoa said that the Gabela case and Dhruv issue (helicopters purchased from an Indian company, to which Gabela was against), have many things in common but regretted that the state´s response “is a denial of justice.”

She questioned thr fact that she was delivered a report without signing of responsibility and that the minister of justice Ledy Zuniga told her that the report with the signing is in the Attorney´s Office.

For Ochoa, her husband was persecuted, threatened in the Assembly, and months later assassinated for opposing the purchase of the Dhruv helicopeters, she concluded.