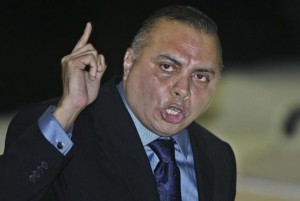 The former legislator Galo Lara announced yesterday that he has resorted to the Inter-American Commission on Human Rights (IACHR ) to request protection from an alleged political persecution against him. This was done after being involved in a triple murder and after the Ecuadorian Government requested his extradition from Panama.

In a statement sent to Ecuadorenvivo news website, after his asylum status was revoked by Panama, Lara said he had asked the IACHR precautionary measures “against the obvious violation of human rights.”

Foreign Minister Ricardo Patiño said this wednesday that in addition, there is an international arrest warrant for Lara, whose whereabouts are unknown .

Regarding the Lara’s request to the Panama government for reconsidering the asylum revocation and a possible refugee claim to the UNHCR, Patiño said he is confident that both institutions will know how to act.