Germany: First classified to the semifinals of the World Cup 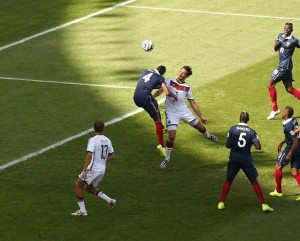 Mats Hummels (5) surpassed the Raphael Varane (4) and scored the lone goal in the match. REUTERS

Germany got the victory and the semi-finals pass of the World Cup defeating France 1-0 in a  disputed game where the Germans showed their superiority.

During the first time Germany had control in most minutes of the game, and earlier in the 13th minute, the Teutons opened the scoring after a great head shot from Matt Hummels.

Benzema Valbuena and Matuidi tried to put the draw for France but the French were unable to do so with the secure defense of Germany that worked fine.

For the second time, France´s offensive was intense in Germany´s field, but without creating clear chances to tie the match.

Thus, Germany became the first semifinalist and waits its opponent, which will be the winner of the match between Brazil and Colombia.