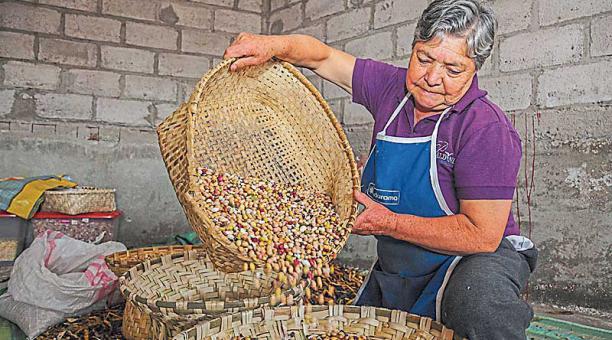 Most grew in both components, but in the case of coffee and hard corn there was more production in the same area. The authorities and producers consider that the assistance programs of the Ministry of Agriculture and Livestock (MAG), private sector investments and good weather conditions influenced this good performance.

The dry bean is at the head in production and surface. Half of the crop is distributed between Azuay and Chimborazo. In the southern province, this product and beans are the ones with the greatest presence, due to their importance in the diet.

The Agroazuay Company of the Prefecture says that 32,000 farmers cultivate them. This production is observed in almost all the vegetable gardens of the San Joaquín, Sayausí, Sinincay, Checa and Octavio Cordero basin parishes; it is generally for self-consumption. The farmers spent more land on the two crops last year and the climate helped: the summer was short and there was no frost or excess water.

These factors helped the production to mature well in the nine months, said Martha Tapia, of San Joaquín. In fruits, pineapple and orange yielded more. The pineapple producers in Santo Domingo de los Tsáchilas believe that the climatic factor has benefited.

In the winter of April and May of last year the fruit reached an optimum state of maturity and there was a greater supply, according to the National Association of Pineapples in Santo Domingo.

In 2016 new plantings were also made, so the harvest areas grew the following year. In the oranges, besides the climate, the practice of management techniques contributed to a high production. Farmers in Bolívar, where a quarter of the area of orange in the country is, pruned, cleaned and used organic fertilizer in plantations of more than 10 and 15 years. They also planted new varieties.

Oswaldo Castillo, of the Agrarian Assembly and of the Technical Table of the Orange of Bolívar, indicated that in 2017 there was an overproduction of 100 million fruits. “They also increased the hectares of orange, replacing those of banana, cocoa and palm.” Coffee was the second crop with the highest production in the country.

The MAG Ecuadorian Coffee Reactivation Program, which began in 2011 and improved performance. For example, pruning, maintenance, timely harvests, periodic fertilization and preventive fumigations were made.

Enrique Medina, director of Market Intelligence at the MAG, explained that the transfer of technology and delivery of seeds and inputs to farmers, through the Ministry’s programs, contributed to the increased production. From USD173.36 million in subsidies for these projects from 2014 to last year. The pricing policy for sensitive products such as rice and corn was another incentive. (I)

Unesco presented its observations on the Law on Communication