A witness states that Guacho buys weapons from the police 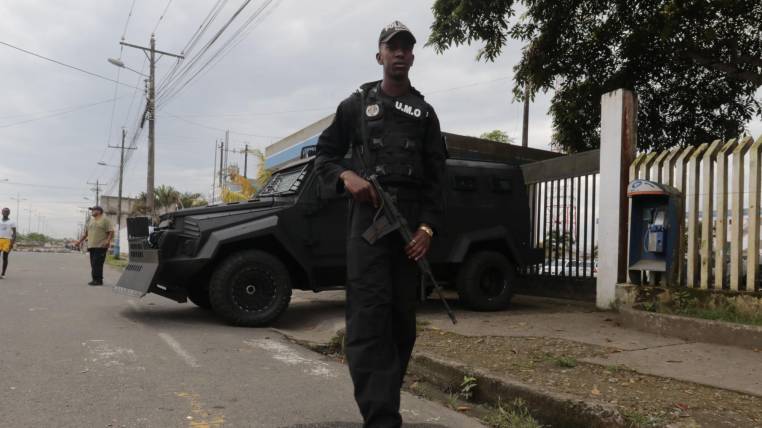 The investigation into the attack that destroyed the San Lorenzo police barracks in Esmeraldas concludes. This week will close the instruction opened by the prosecutor Wilson Toainga after the incident on January 27. There are 28 defendants, including Walter Arizala, alias Guacho, leader of the narcoterrorist front Óliver Sinisterra.

These days the prosecutor will evacuate the last steps in a file that exceeds 25 folders with documents ranging from versions, expert reports, certifications, to international criminal assistance.

One of the latter arrived from Colombia, via e-mail, and was included in folder 24. It is an X-ray of the Guacho group described by a former collaborator detained in Colombia who took refuge in cooperation and receives protection.

The document that EXPRESO agreed to is the extension of the version of Washington Arroyo before a researcher from the Gaula groups of the Colombian Police. He talks about the collaborators, the supply of weapons, the beginnings of Óliver Sinisterra, the site where the proof of life of the El Comercio newspaper team kidnapped and murdered was recorded.

Arroyo’s first testimony allowed the Prosecutor’s Office to identify at least 22 of the 28 defendants in the case of the attack on the police station, including Guacho and Jesús Vargas Cuajiboy, alias Reinel, who was arrested in Colombia on Saturday. Reinel was identified as the custodian of journalists Javier Ortega, Paúl Rivas and Efraín Segarra, plagiarized on March 26 in Mataje, while covering the murder of four Marines.

Arroyo said in his testimony that “in terms of logistics, weapons are purchased from the Ecuadorian Police, who are the intermediaries to buy weapons in the passage of Peru and deliver them to the village of Puerto Rico and El Pan” . He says he does not know the route of arms trafficking, but he assured that the monetary transaction is in charge of Guacho and alias Cachi, leaders of the front.

The vests worn by terrorists are acquired “where we buy food, in stores in the sectors of Palo Seco, Puerto Rico, La Playa, Vallenato and San Lorenzo, Ecuador”. The trainings of the armed ones are fulfilled in the path of Sugar, in Tumaco, counted.

A police source sees the possibility of this institution providing weapons complicated. He explained to this newspaper that in the police the loss of a weapon implies a judicial process that affects the custodian. The institutional position is that the Attorney General’s Office and the justice system in general make the investigations, the necessary connections and transparent information.

Another novelty of the Arroyo version is the birth of the criminal group. “This group comes after a meeting of drug traffickers in the municipality of Tumaco,” he recalls. Among them, Don Omar, Cachi and Guacho.

According to him, a good part of the front employees are Ecuadorians who receive payments of between three and six million pesos per month (between 1,000 and 2,000 dollars) with departures every two or three months to the jurisdictions controlled by the group.

Guacho has orders of imprisonment in Colombia and in Ecuador and request of red diffusion to Interpol. He is prosecuted for terrorism and organized crime. On July 19, he will hold his first trial preparatory hearing in Quinindé, Esmeraldas. (I)