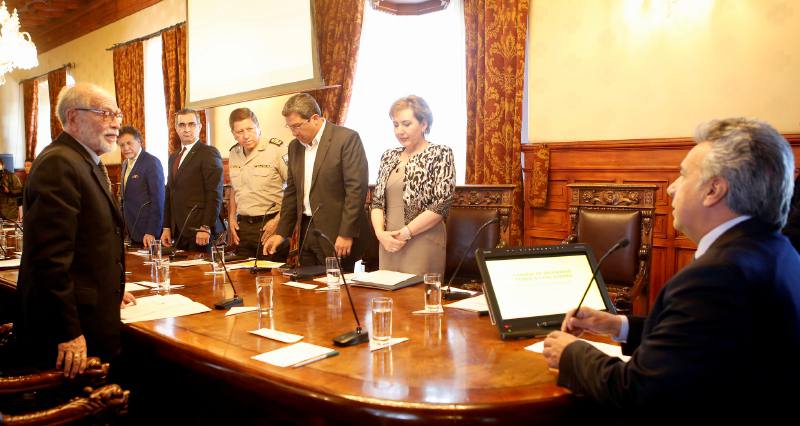 As soon as dawn and Ecuador received yesterday the news of a new kidnapping on the northern border, the second after the aroused on March 26 and the subsequent murder of three members of the journalistic team of newspaper El Comercio.

The Interior Minister, César Navas, got up early to give a press conference at the ECU-911 in Quito. “We must inform the country that through the information channel with alias Guacho (a WhatsApp number) we have received information at night hours about a new kidnapping of two citizens. Through this communication channel came a life test video of a couple … “, said Navas, who stressed that it was the first time he received the notification directly.

In this video the drug traffickers request, through the hostages, that their demands be met. “Mr. President, I ask you to please help us, to give us a hand so that what happened doesn’t happen to us…”, says a man in the video of 57 seconds that immediately went viral. That just allowed that hours later it was determined that the kidnapped were the Ecuadorians Óscar Efrén Villacís Gómez, 24, and Katty Vanesa Velasco Pinargote, 20.

Navas lambasted alias Guacho, leader of the Oliver Sinisterra Front, a FARC dissident dedicated to drug trafficking and operating in the Colombian Alto Mira, bordering Ecuador. He reiterated that they will not give in to the demands. “We will not fall in his morbid game,” he said.

The event immediately forced a meeting of the Public Safety and State Council (Cosepe), which is composed of President Lenin Moreno and the holders of the National Assembly, the Participation Council, the Prosecutor’s Office, the Attorney General’s Office, the Judiciary , and the Ministers of the Interior, César Navas, and of Defense, Patricio Zambrano.

After the appointment, Navas detailed that an exposition of the case was made, as well as the chronology of the time, since the plagiarized ones would have left from Santo Domingo in the direction of San Lorenzo, Esmeraldas.

He noted that the last telephone contact with relatives occurred last Wednesday. That day or Thursday, plagiarism would have occurred, because a text message was received.

Among the resolutions of the Cosepe is to provide all the support to both the Armed Forces and the National Police to complete their technological equipment to improve their operations in the area of Esmeraldas.

The official maintained that he did not know the location of the hostages, the exact time and the circumstances in which the kidnapping took place. In addition, a Crisis Committee will be formed.

Navas said that the last communication with the narco-criminal group was on Monday night. He indicated that he did not know the exact request of the plagiarists, since 42 people of that group have been detained in several operations.

Before the appointment of the Cosepe, Zambrano indicated that the captives are not military and that he has no information that they are undercover agents, as indicated by Colombian media.

On the recovery of the bodies of journalist El Comercio newspaper team, Javier Ortega, Paul Rivas and Efraín Segarra, murdered in Colombia after their kidnapping, Navas said that work is continuing and the governments of Ecuador and Colombia have expressed their intention to continue cooperating with the International Red Cross, but there has been no response until yesterday from those who murdered them. (I)

Petroecuador ‘shoots’ the competitions for employees

Escort of the President, arrested for links to drug trafficking