Government will provide free kitchens for beneficiaries of the bonus 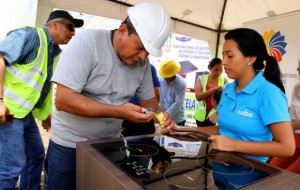 he Deputy Minister for Electricity, Wladimir Gonzalez, announced yesterday that the beneficiaries of the BDH will receive free induction cookers of four burners.

He also noted that 500,000 people that receive the subsidy will receive a free cookware set of seven pieces. In addition, they will not pay the $ 38 (plus VAT) of the internal connection in homes that the new type of voltage (220 volts) requires.

At a socialization meeting between employers, legislators and citizens, held at the National Assembly, the Minister of Electricity, Esteban Albornoz, said that this year the demand of at least one million households will be covered.

The program plans to replace 3.6 million kitchens. Currently there are 145,000 users registered in the program.