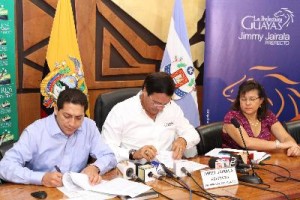 On January 22, the Prefects of Guayas and Los Ríos, Jimmy Jairala and Marco Troya respectively, met in the plenary hall of the Provincial Council of Guayas to sign the agreement definition of limits and settle the territorial disputes in three of the four points in conflict between the two provinces. The sector Matilde Esther, between the Bucay and Babahoyo counties, is the only missing point to resolve.

After the talks between the officials, the analysis of the sector and sense of belonging of citizenship, Guayas and Los Ríos resolved at the first point, between Vinces and Salitre, distributing the six square kilometers in dispute in almost equal parts. This same mechanism was decided in the second stretch of 10 kilometers between Jujan and Babahoyo. While the third and final point, also between these two counties, it was resolved to establish the Jujan river as the boundary between both jurisdictions.