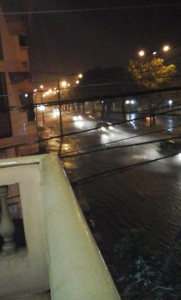 The streets of Guayaquil were flooded due to heavy rains on Friday night and Saturday morning. The strong storm also caused power blackouts in some parts of the city

This winter has brought floods not only in the province of Guayas, but also on the southern border. Many cars broke down because the water level went up in different streets of the city. The Garay substation (south) and the Juan Tanca Marengo central station of the Metrovia were “out of service” last night.