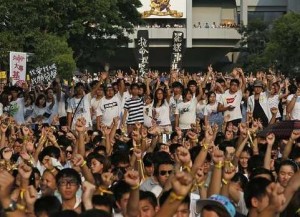 Thousands of students from Hong Kong yesterday began a strike against Beijing’s proposed reform to the electoral system of the former British colony.

13,000 members of about twenty university partnerships, people gathered in the central square of the Chinese University of Hong Kong to launch the protest under the slogan “Civil Disobedience: our destiny in our hands.”

The student strike is called in response to the announcement in Beijing, last Aug. 31, for electoral reform for Hong Kong 2017 elections that impede free nomination of the head of the local government.

Martin Lee, one of the historic leaders of the pro-democracy movement in Hong Kong, described the proposed central government as “to authorize Hong Kongers to choose between a mango, a banana or a rotten pineapple”.

Beijing vetoed it the free nomination of candidates for the major political office in the territory, allowing only a maximum of “two or three candidates,” admitted, and selected by an election committee of 1,400 people, chosen at the same time by Beijing.