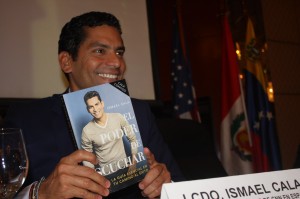 Today Ismael Cala, Cuban journalist and producer of CNN in Spanish, arrived to Guayaquil to introduce himself in the XV Congress of dollarization Strengthening, organized by the Inter-American Business Federation (FIE for its Spanish acronym).

The Mayor of Guayaquil, Jaime Nebot Saadi, gave a recognition to the reporter for being a leader in his profession in Latin America.

The young journalist spoke for about an hour with young entrepreneurs on the art of listening.

“I have interviewed many people; people sick of cancer and people sick of power, and I’ve realized that the key is to listen,” Cala said at the start of his speech.

The audience was attentive to every word of the journalist, who said that from the beginning he followed the American journalist Larry King, and it was from him that he recognized the great quality of listening. The journalist invited the participants to develop this skill and to believe they are leaders from their place of work and from any work they perform.