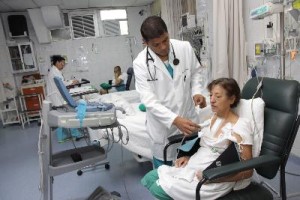 The Ecuadorian Institute of Social Security (IESS for its Spanish acronym) and the Ministry of Health responded to the release of private hospitals, demanding arrears for medical care to affiliates.

Hugo Villacrés, President of IESS, downplayed the statement because, according to his version, he has set the dates for the several meetings to be held with suppliers. He also criticized the treatment given to members.

The Health Ministry also reacted to the statement of the National Association of Private Clinics and Hospitals of Ecuador (Achpe for its Spanish acronym). Through a newsletter they expressed it was an incomprehensible “attitude ” because they have made the payments.

It also added that the private hospitals and clinics have billed $ 19.9 million between 2013 and 2014, of which $ 14.4 million have already been paid, and $ 2.4 million  already audited are going to be disbursed.