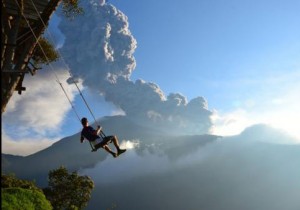 The 2014 Traveler Photo Constest, organized by the National Geographic,  received about 18 000 photos from around the world related to nature and travel. The first place went to Marko Korosec for ‘Independence Day’, the second place to Agnieszka Traczewska for ‘Mea Shearim, Jerusalem, Israel’, and third place to Marc Henauer for ‘Diver in Magic Kingdom’. The gallery can be viewed via this link:

Among the seven honorable mentions, there is a photograph taken at The Tree House in Baños, Ecuador, by Sean Hacker Teper, called ‘End of the World’. We can admire in the background the volcano Tungurahua in the middle of an eruption. The image was taken on February 1 this year, minutes before the people who were around evacuate the area.