“Imbalance” between fixed salary and the family food basket is $ 303.96 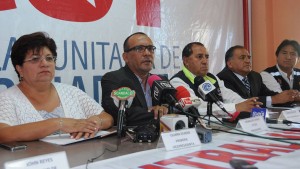 The cost of the basic food basket, established by the National Institute of Statistics and Census (INEC for its Spanish acronym), amounts to $ 669.96 (report of November 2015); while the Unified Basic salary has just been set at $ 366 for 2016. This is an imbalance of $ 303.96, that generated conflicting opinions among workers unions in favor and opposed to the regime of Rafael Correa.

The family food basket consists of 75 out of 359 products that make up the general products basket, which is measured by the Index of Prices (inflation). These products are considered essential. They include food, drink, shelter, clothing, shoes and others.

Yesterday, Oswaldo Chica, president of the United Workers Central (CUT), allied to the Government, said that while it is true that workers aspire a better remuneration, it is necessary to look at the national context and stated that a higher increase “would have not been responsible.”