Indigenous groups protested outside of the CC 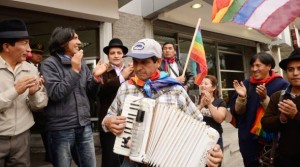 The Constitutional Court (CC) was this December 17 the stage for groups of indigenous and women to require rectifications of the management of social policies implemented by the government of the citizens revolution.

Indigenous representatives  of the CONAIE, ECUARUNARI and merchants arrived in groups to the Cucomitae to require that the judges of the CC make a decision on the claim unconstitutionality claim of Decree 16, expired in June 2013, through which the social organizations of the country are forced to register, otherwise these are not be able to continue working.

They also reiterated that they will not leave the seat of the CONAIE by provision of a decree, since they won it after years of struggle.

Ecuador finished the environmental cooperation with Germany and returns $ 8.5 million for funding