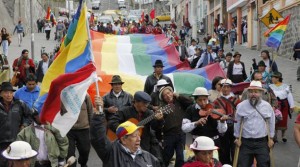 Indigenous members protested against the Minister for Economic and Social Inclusion, Betty Tola, during the spiritual cleansing they made at building of the Ministry, which they said, is full of negative energy.

Amid shouts like “traitor”, “sold” and “opportunistic” against the minister, who was a member of Pachakutik until the beginning of this Government; the indigenous burned incense and swept the principal door with stinging nettles.

These actions were made in rejection to the unilateral termination of the bailment agreement for the occupation of the headquarters of the Confederation of Indigenous Nationalities of Ecuador (CONAIE), whose term expired in January 5 to vacate the building.

MIES’s argument is that they need the building to turn it into a foster home for young people who have left drugs.

Alleged payments of retirement pensions to former officials, which exceed the limits, are denounced