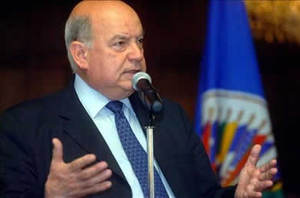 After his participation in the summit of the Community of Latin American and Caribbean States (CELAC) held this week in Cuba, the general secretary of the Organization of American States, José Miguel Insulza, said he was “very pleased” about the subject.

About the OAS, said he did not see any “conflict” between the organism “fully in force” which he directs and the organization that born as an alternative to this.

Regarding the statements quoted by DPA cable, of Marco Albuja, new Ambassador of Ecuador to the OAS, saying that the hemispheric body “will die of starvation” if is not able to transform itself listening at the “citizenship,” Insulza replied assuring that the OAS is an institution “fully in force” and open a “frank conversation”.

However, exhorted that such conversation will be made as from “advancing honest opinion and respect for the opinion of all countries and not upon the attempt to impose ideological visions of each other.”

Presidents are chosen on El Salvador and Costa Rica