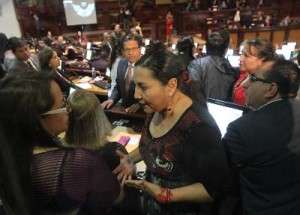 The management of the Oversight Commission of the Assembly, presided by Gabriel Rivera, was called into question on 5 February in the plenary session, after her own peers were divided by the case of the Dhruv helicopters and the investigation of the death of the former Commander General of the Ecuadorian Air Force (FAE for its Spanish acronym), Jorge Gabela.

After this, the Assemblyman of Alianza PAIS (AP), Soledad Buendía, proposed to include in the agenda of the day the creation of a special commission that investigates the case of Dhruv, an approach that surprised the members of the plenary.

This proposal caused the suspension of the session for 10 minutes, a moment in which the block of AP met in the office of the president of the Assembly Gabriela Rivadeneira to reach a conclusion: the Council on Legislative Administration (CAL for its Spanish acronym) will decide whether it appoints or not an occasional commission. This means that the CAL has in its hands the investigation of the case.