Italian prosecutors investigate the case of immigrants in Lampedusa 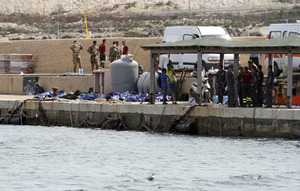 During the celebrations of International Migrants Day, the Italian prosecutor in Agrigento (Sicily) revealed this Wednesday carried out an investigation that arose after the incident occurred in the reception center on the island of Lampedusa, where a group of immigrants was placed naked in row and weathering to be disinfected.

According to the Wednesday reports, court sources said they have the facts come to light by broadcast of a video by the Italian channel RAI2. Following this controversial video research under the assumption of an alleged crime of violence and abuse against private persons in care and custody began.

So far there is no record of any person between investigated by the prosecution and studied video images released by the RAI2 chain, showing how the reception center inmates were subjected naked and weathering to be disinfected scabies.

For its part, the United Nations said last Tuesday that the countries that perform arbitrary migration policies will be processed as authors of a violation of human rights of immigrants.

The White House will not negotiate with Edward Snowden