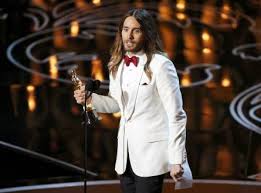 Jared Leto, Oscar winner to best supporting Actor for his role in the film ‘Dallas Buyers Club’ and Kevin Spacey took the microphone to express its support for the peoples of Ukraine and Venezuela due to the protests of the citizens of these countries against the Government.

“To all the dreamers around the globe watching tonight, in places like Ukraine and Venezuela, I would like to say that we are here and as you struggle to make possible their dreams, to live the impossible, we are thinking of you tonight”, said Leto.

Kevin Apacey posted on twitter: “Venezuela don’t give up, everyone has the right to speak!” #SOSVenezuela #PrayForVenezuela”.

‘One Russia’ Russian State television said that they would not convey the ceremony live by the need to devote their television news, while in Venezuela the private channel Venevision cancelled the transmission without explanation.