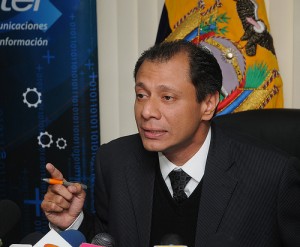 The Vice-President Jorge Glas, announced that after completing his current term he “is going home” without running for reelection if a constitutional amendment that allows indefinite reelection is approved.

“… After 2017 I’m going home, I have many things to do, you know I’m a RF engineer, I love this world of the media, I was an interviewer for eight years, almost nine before being a public servant”, Glas said in an interview with several media of Manabi.