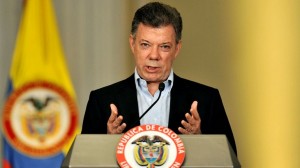 The president Juan Manuel was proclaimed the winner this Sunday’s presidential elections, according to official figures.

The Santos campaign headquarters in Bogotá  began to celebrate the results. Zuluaga has recognized his defeat.

Abstention in runoff election was over 53%.

Since late 2012, the Santos government and the Revolutionary Armed Forces of Colombia (FARC) advance a peace process to try to put an end to 50 years of confrontation between the parties.