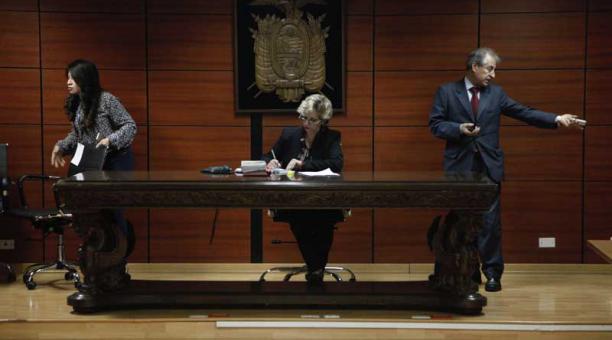 The legal status of former president Rafael Correa changed the afternoon of Tuesday, June 3, 2018. Before that he was a suspect who could defend himself in freedom. Now he is a defendant with a preventive detention order in the country.

The one who modified the precautionary measures for Correa was Daniella Camacho, judge of the National Court. She ordered the pre-trial detention of the former president for the duration of the investigation into the kidnapping of ex-ambassador Fernando Balda.

This decision was taken at a public hearing, in which he also ordered that Interpol be informed so that it could proceed with the location, capture and extradition. When the return of the former head of state is achieved, he will be transferred to Jail 4 in Quito.

According to the judge, the new precautionary measures are the consequence of the failure of the former president to appear every 15 days before the National Court, as ordered on June 18. Instead, Correa decided to go to the Consulate of Ecuador in Belgium, where he lives. Precisely, the hearing on Tuesday was requested by Caupolicán Ochoa, Correa’s lawyer, whose mission was to get the judge to accept the presentation of his client in the consular office.

Ochoa presented six documents to support his request, including a letter sent to the National Assembly, in which the former president announced that when he finished his term he would settle in Belgium.

Another document was from the Electoral Delegation of Pichincha, where it states that it changed its address to the European country. It also included a lease; a school certificate for your child and a hospitalization certificate for his daughter.

However, those papers were challenged by Felipe Rodríguez, lawyer of Balda, who pointed out that they were not apostilled or notarized. And they were also considered irrelevant by the Prosecutor’s Office. Once the Ochoa exposition was over, the judge ordered that the breach of the first precautionary measure against Correa be analyzed.

At that time, the Attorney General Paúl Pérez, took the floor. He asked that the preventive prison be ordered against the former president, because he did not appear on Monday in the National Court. “There is no offer that the former president will appear in the process,” argued Perez, and also requested red diffusion to Interpol.

The same was requested by Balda’s defense, citing article 542 of the Integral Organic Penal Code (COIP). This determines that if a defendant fails to comply with a precautionary measure, the prosecutor will request the judge a custodial measure.

After hearing these requests, Correa’s lawyer confronted the judge and raising his voice demanded “impartiality.” In his opinion, the hearing was illegal and the prison was requested for the sole purpose of “punishing” the former president. After listening to the lawyers, the judge arranged an hour of recess to base its resolution.

Then she returned to the courtroom and recalled that on June 18 he had “expressly” denied that the former president should appear before an international delegation. However, Correa asked on Monday at the Consulate of Ecuador in Belgium to certify their attendance.

The magistrate stressed that this document has no validity and that therefore former president e failed to comply with the measure ordered. The diligence lasted about three hours and amid applause from followers of Balda, the parties withdrew from the room. On the ground floor of the building, Ochoa announced that he will appeal the judicial decision. “A room of the Court must know this resource and there they will be able to verify all the arbitrariness that have existed in the process”.

In addition, he said that what is sought is to collect revenge against his client. At night (already in the early morning in Belgium), former President Correa wrote on his Twitter account: “Prosecutor put to the finger, link without any evidence, judge who acquiesces to the contempt of the Assembly, precautionary measure impossible to fulfill, etc. . Do you know how successful this farce is going to be at the international level? Do not worry, it’s all a matter of time.”

On the other hand, Prosecutor Pérez indicated that if Correa’s defense appeals the judicial decision, the Prosecutor’s Office will be attentive to present the necessary arguments in order to maintain the precautionary measure. The idea is that the former president appears in the future.

The defense of Balda, on the other hand, expressed his satisfaction that he has acted in Law. “The judge had no alternative, that (preventive detention) was the only measure I could take,” said Felipe Rodríguez. Balda said he was worried that the former president could apply for political asylum in Belgium or another country.

For this reason she announced that from today he will go to the European embassies based in Ecuador to present “the evidence that is not a political persecution, but a judicial process for a crime: kidnapping.” Earlier, Balda had also commented that she would ask that ex-prosecutor Galo Chiriboga be investigated”In the version that the former Director of International Affairs of the Office of the Prosecutor indicated, Chiriboga ordered the suspension of the investigation related to my plagiarism,” said Balda.

The abduction of ex-ambassador Fernando Balda took place on August 13, 2012 in Bogotá, Colombia. Balda denounced the incident in the Office of the Attorney General of Ecuador on April 3, 2013, but the investigations were activated on January 23, 2018. (I)