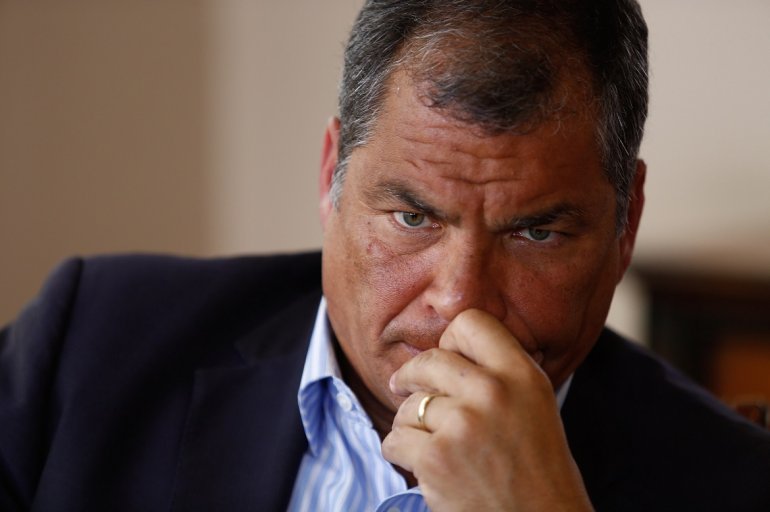 The thing about Rafael Correa in the Consulate of Ecuador in Brussels was a showy shot in the air: it is not the accused who decides where to appear to comply with a precautionary measure; it is the judge. And Daniela Camacho, who knows the cause that is being followed against the former president for the kidnapping of Fernando Balda, had been very clear: not only fixed the seat of the National Court as the place of presentation but also expressly denied that the Consulate was an alternative. Once established, then, that Correa failed to comply with the measure (and the judge did not take half a minute to reach that conclusion), there was only one way left: to dictate the order of preventive detention and to officiate at Interpol to request its red diffusion and proceed to “the immediate location and capture for extradition purposes” of the citizen Rafael Correa. Caupolicán Ochoa, lawyer of the former president, ranted in vain.

Three hours lasted the audience that, for once, did not have the presence of correístas bars: they arrived late, when the room was already full. It did not do anything for Ricardo Patiño to be victimized by Twitter: he could not enter; It was physically impossible. The only public demonstration that accompanied the judicial process was the one that starred a handful of followers of Fernando Balda with a large sign where you could see the face of Rafael Correa and a superimposed legend in block letters: “Se busca“.

Correa knew from the first moment that presenting himself at the Consulate was not enough. The official who received it said it to him: “we have not received any jurisdictional delegation and we can only act by delegation in that field”. The hearing began with the reading of a series of communiqués (from the Consulate, from the Foreign Ministry, from the National Court of Justice) that gave an account, precisely, of the nature of what happened in Brussels: an act without judicial value.

As for Caupolican Ochoa, he did everything wrong again: he flooded the accusing party with a sea of documents in French, with which he wanted to demonstrate Correa’s inability to leave Belgium because he was in charge of caring for his children (one in the hospital, another in the school), but that were not accepted in the process because they were not duly apostilled, certified and notarized. He filed a request for review of the precautionary measures two days after his client failed to comply. He tried to argue about the invalidity of the process but did so with generalities, without identifying any judicial reasoning that could be considered as insufficient. He did not bring any new facts in his defense other than those that were already useless in the previous hearing … In short: the defense of the former president was, again, a complete disaster.

In addition, it was learned during the hearing that Ochoa had been present at the judge’s office, which is strictly forbidden without the knowledge of the other party. He says it was a confusion. The fact is that he was evicted by the police and still has the courage to complain about what he considers an outrage. He reddened with impotence. He made a fuss. He accused the judge of undermining the rule of law, of making arbitrary decisions, of not motivating his resolutions and, out of the courtroom, of receiving orders. He did not want or could not tell from whom.

He also refused to accept what for the prosecutor, Paúl Pérez Reina, is sufficient evidence to link Correa: the testimony of Raúl Chicaiza, the police agent in charge of executing the kidnapping, according to which the order was given by the own president. “The prosecutor is lying! Chicaiza did not say she received Correa’s order! “Ochoa shouted, red with anger. “He said he heard him on the phone saying: ‘Do what the skinny guy is going to ask you.’ The fault, then, will be the skinny one. Involuntarily comedian was Ochoa during the audience.

Felipe Rodríguez, lawyer of Balda and private accuser in this process, was clearer in his legal reasoning. He said that Rafael Correa “is already escaped”; and that not only there are indications: “it is proven that precautionary measures not depriving freedom are not enough in this case”.

The judge Daniela Camacho, who at several moments had to arm herself with patience to deal with Ochoa (“lower your voice”, she even told him), took almost fifty minutes to recess to motivate her resolution, after which she returned to the living room. Outside, in some indeterminate place, a group of soccer fans screamed and cried with the penalty shoot-out of the Colombia-England match. Those present in the room had joined the correístas Virgilio Hernández and Carlos Viteri, with faces of wake.

“The document presented by the accused is invalid and does not justify the breach of the measure, “read the judge. “The possible non-appearance of the accused in the trial becomes evident”.

With each word it became clearer what the outcome would be. She even spoke about John Polit, the son of the former Comptroller, who travels from Miami to Quito every 15 days to appear before the Court. And she used the motivation of the judge in that case as background. The reading lasted twenty minutes. Nothing to do for the correístas: their leader will be imprisoned. It was announced, yes, but it was not inevitable.

There was applause in the room.

Two weeks of freedom? After the hearing, the parties took turns before the cameras on the ground floor of the courthouse. Caupolicán Ochoa called the judicial decision a political plot and said the judge is carrying out orders. Felipe Rodríguez was satisfied and said that, according to his experience, the application of pretrial detention can take two weeks. (I)