Kerry: We expect Russia respects the ceasefire to lift the sanctions 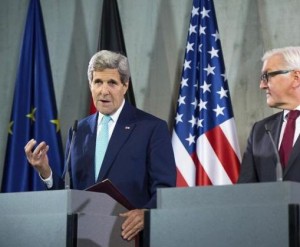 The Secretary of State, John Kerry, expressed his desire to lift the sanctions imposed on Moscow by the crisis in eastern Ukraine and for this, he demanded that the cease-fire be respected.

The ceasefire agreement reached by Ukraine, pro-Russian separatists and Russia in early September in Minsk is a “clear roadmap,” Kerry said in a joint press conference in Berlin with his German counterpart Frank-Walter Steinmeier.

“We also hope that can be lift the sanctions,” said Kerry, something with which the rest of the world agrees, he added.

The diplomat said that he wants to see Ukraine as “a bridge between Russia and Europe” and assured that Washington does not seek conflicts with Moscow.

“We would rather cooperate” with Russia, said Secretary of State before expressing the hope that Moscow “understands that the international community takes very seriously” the violation of the sovereignty and territorial integrity of a country.