The president, Rafael Correa, has assured that next Saturday November 15, during the usual nation-wide broadcast, he will present the reforms to the Labour Code in a ceremony in which the President has called upon his followers to fill the Avenida 9 de Octubre, in downtown Guayaquil.

Correa, in discussion with media in Guayaquil, said that the government will present specific reforms and convened the trade union sectors to “stop politicking” to advance in the future, to the drafting of a new body of law for the work in the country.

The president lamented the existence of “proposals of the nineteenth century” among certain labor groups, while remembering that under his administration several “revolutionary” steps had been made, in grounds of labor rights as to affiliation, the achievement of a living wage, among others.

“We’ve never been with the money, but with the work and we will always keep trying to improve the quality of life of our working class,” said the Head of State when inviting workers to support reforms promoted by the government. 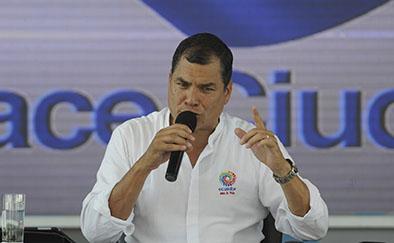