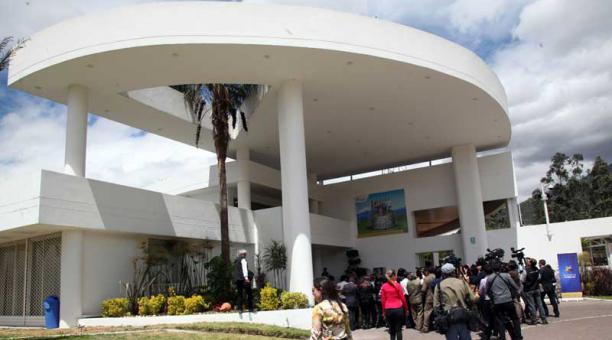 The official decision was made last night, March 19, 2018. President Lenin Moreno ordered that the process to eliminate the Secretariat of Intelligence (Senain) should be initiated. In the space The President informs, the Head of State indicated that the decision obeys to the “ethical call of the citizenship” and is part of the administrative measures of austerity.

The Senain was created in June 2009 with the Public Safety Law. By then it was said that “Intelligence will no longer be based on a doctrine of national security as in the past, but from the new vision of integral security; taking human beings as the center of tasks.”

But then complaints came about a presumed persecution of politicians and opponents of the previous government. In July 2015, then legislators Cyntia Viteri and Andrés Páez even arrived at the Lumbisí bunker, where the Secretariat operates. The idea was to look at how they operate in the interior, after emails from the Italian company Hacking Team were leaked at the beginning of that month, according to which the Senain would have acquired the software ‘Galileo’.

It was a technology capable of penetrating computers and cell phones to spy on its users, through the activation of recorders and cameras of equipment, and the capture of emails and WhatsApp chats. In those days it was also known how the entity operated with a diagram to follow the politicians who opposed Rafael Correa. Guillermo Lasso, for example, established his personal and professional relationships. There was follow-up of their international contacts, their foundations, their social initiatives, among others.

On January 6, 2014, the El telegrafo published ‘hacked’ emails from Martha Roldós. Yesterday, March 19, she said that she was spied by the State. “I hope that the Senain closes, but that it is it,  everything must be investigated. I think the minimum right I have is to access my file in the Senain, because I want to see what other actions have been taken against me.”

Rommy Vallejo, who was left out of office on February 21, was one of the questioned characters. She was replaced by Jorge Costa. Ramiro Román, a criminal lawyer and member of the Anticorruption Commission, says that intelligence subjected the ordinary citizen. “His work was really more political. They dedicated themselves to politically persecuting civil society: assembly members, journalists, lawyers … It was a common practice. ” Its mission, legally established, was to exercise the rector of the National Intelligence System and produce strategic information for the security of the State, society and democracy, “in compliance with the constitutional principles of Good Living.”

As a member of the International Affairs Committee of the Assembly, Diego Salgado received Rommy Vallejo on more than one occasion. “For me it is absolutely clear: for the only thing that served the Secretariat was to persecute the opponents of the correísmo. It has not served to disrupt criminal gangs. Right now we have problems on the northern border with narco-terrorism. ” (I)