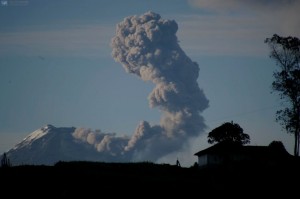 A less energetic but continuous activity was recorded yesterday in the Tungurahua volcano, which a month ago began a new explosive pulse within its eruptive process, which has lasted fifteen years.

The activity “is not so energetic but is continuous”, with 20 bursts of low magnitudes in the last 24 hours and permanent gases and ash emissions, said the volcanologist Patricia Mothes, from the Geophysical Institute (IG for its Spanish acronym) of the National Polytechnic School.

Mothes said that the volcano continues in the “degassing” process, but clarified that the evolution of its behavior is difficult to predict.

The IG said it is very likely that this type of behavior is maintained for several days, until it releases the stored energy.

Tame will have flights to Florida