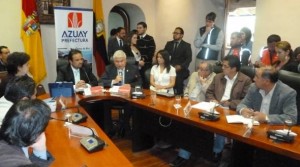 Azuay and Guayas have a preliminary agreement which must socialized into a biprovincial parliament that the two provinces foresee that will be the second week of January, to resolve the border problem they maintain. This was announced last Monday by Paul Carrasco, Prefect of Azuay, to the Commission on the Limits of the Cuenca Cantonal Council and indicated that theParliament will be held in Machala.

Carrasco said that after Azuay submitted as first proposal a dividing line proposed by Fernando Cordero when he was the Mayor of Cuenca; and Guayas the decree of Eloy Alfaro, of 1826, with an elaborated demarcation line, a new line was determined where several communities are left in Azuay territory and others in the other side.