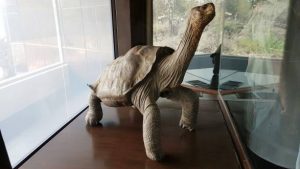 The dissected body of Lonesome George.

The Hope Symbol Hall was inaugurated yesterday at Santa Cruz, in the Galapagos Islands whose new guest is Lonesome George.

The dissected body of the emblematic turtle was unveiled yesterday after almost a week of its arrival from New York, where it remained and was embalmed for about five years.

A special exhibition camera houses the famous tortoise to prevent climatic conditions from deteriorating the body, which can be seen by tourists from today.

During the inauguration yesterday, the Ministry of the Environment announced that George was declared a heritage of Ecuador. The director of the Galapagos National Park, Walter Bustos, emphasized the importance of the preservation of Lonesome George: “It is the best incentive to continue working, many species need us.”

Quito, in the 10th place in South America for having the better quality of life