Lower surcharges are requested in the north of the country 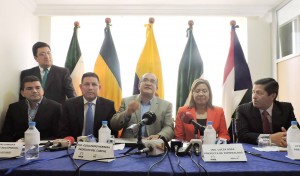 The prefects of Carchi, Sucumbíos, Imbabura and Esmeraldas are part of the Northern Commonwealth, which has asked the Government to review the percentage of safeguards applied as a measure to improve the situation in those provinces.

“What we are asking for is a review, so those sectors, such as textiles, if it has been affected, a reduction can be done …” said Guillermo Herrera, president of the Commonwealth and prefect of Carchi, in a press conference.

It was also requested that the announcement of adjustment in the State Budget does not apply for the provinces that make up the Commonwealth and remove the state of emergency issued due to the Cotopaxi volcano, in indirect areas because, he argued, it affects tourism.

Herrera estimated that in the four localities, the reducion of sales ranges from 40% and 50% in commerce and tourism, in the last year, a situation that has “worsened” in recent months with the devaluation of the Colombian peso.

Two standards to control the supermarkets