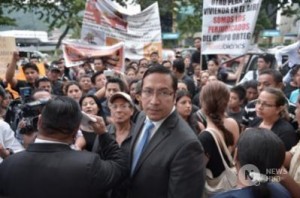 This March 9 is scheduled that performed a medical examination to Jorge O.T, general manager of real Terrabienes, to verify if he can be transferred to the penitentiary for preventive detention after passing a breach in his health on Thursday March 5, moment when he was arrested by order of the prosecutor of inmediate action Julio Vacacela.

The judge Patricio Vidal opened the preliminary investigation against the employer for an alleged crime of fraud to have breached the construction of macroproject Arcos del Rio, located at km 1.6 of the Pascual-Terminal Terrestre highway.

It is estimated that more than 1,200 customers had paid part of their homes and some have settled all properties, but these were never delivered.

Furthermore, Rafael Candell, sponsor of one group of victims, said that today asked to the Prosecution that the promissory notes signed by the affected and that were not returned are put into legal custody with the objective that are not used for other purposes.

Terrabienes manager on last week sent a statement confirming that a business group would be interested in continuing the project Arcos del Río, but so far has not revealed his name to an issue of confidentiality.

Guayaquil Chamber of Commerce criticizes the implementation of safeguards