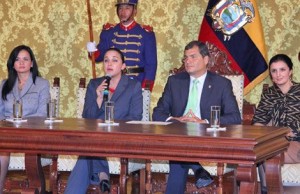 The heads of the 12 legislative commissions and officers of the Assembly held a meeting on October 29 with President Rafael Correa and Alianza País officials. The objective was to review the laws that are pending and set priorities until the end of the year.

The President of the Audit Commission, Gabriel Rivera, said that they reached an agreement on the issues that could cause some difference as the Land Law, the General Code of Processes and reforms to the Labour Code.

The legislators also said that the issue of amendments to the Constitution was not a point raised during the meeting with Correa.