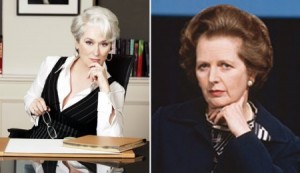 American actress Meryl Streep will soon be on the set of The Iron Lady, since she will play the role of iconic British Prime Minister Margaret Thatcher, who was in charge from 1979 to 1990.

Jim Broadbent, the actor who will play Margaret’s husband, Denis, said he thought Meryl was “perfect” for Thatcher’s character. “She’s perfect casting in many ways – she’s got a good look, and she’ll absolutely do it in a brilliant way,” Jim told New York Magazine.

Phyllida Lloyd, director of the film, believes Thatcher need to be played by a star and Meryl is the best for the role, despite her American origin “It will not be a local version, Meryl will add an American view to it,” she added.

“Meryl’s also got an interesting eye on the script: she can bring an outsider’s view on the story, so that it won’t become a lazy, parochial piece that Brits understand but where nobody else really knows what’s going on. She can ask the questions that foreign audiences will ask,” Jim continued.

Pathe and BBC Films will produce the movie and its filming will begin in February.