Military assistance from China to Ecuador would reach $ 29 million 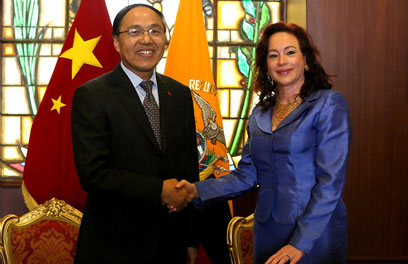 Free military cooperation from China to Ecuador has been reflected in agreements and conventions signed between 2010 and 2016 and so far border $ 29 million.

The information available at the Foreign Ministry includes an agreement would be in force until 2017, amounting to 18 million yuan, this is about $ 2.7 million and whose protocol does not provide for the delivery of weapons or ammunition.

This agreement was signed on May 9, 2012, and states that China offers materials such as ambulance, surgeries, laboratory, X-ray, sterilization, pharmacy and other sort of vehicles, in fulfillment of two agreements between the armed forces of Ecuador and the Liberation Army of China, on free military aid, signed on November 12, 2010 and December 27, 2011, under the management of Javier Ponce.

In September 2014, former Minister of Defense Maria Fernanda Espinosa signed another for $ 4.8 million. Then, Chinese Ambassador Shi Xiong assured that his Army allocated “for free” 62 million yuan to the Ecuadorian Armed Forces

Then, in November 2015 the following minister, Fernando Cordero, signed another agreement for 20 million yuan ($ 3’130.600) for material that would be used during an eventual natural disaster.

On August 15, Ecuador received another donation for $ 9.2 million. This donation represented 26 containers: 16 with material to mitigate the effects of the earthquake of April 16 and 10 with technical equipment such as 10 thousand AK 47 rifles.