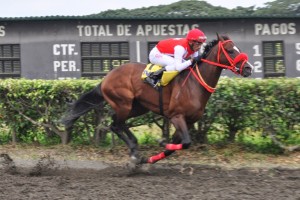 The Ecuadorian horse Mimo will go after its victory number ten on the national horse racing, starting as favorite in the classic National Foster, that runs this December 14 over a distance of 1,800 meters.

Malek’s son, that has accomplished a relevant campaign in 2014, will face other national horses as Keep It, Marco Polo, Parque Cielo and Bafana Bafana at the racetrack Miguel Salem Dibo.

Mimo, that has already won over distances of 1700 meters, is looking one more achievement in its saddlebags, this time led by the Ecuadorian jockey Joffre Mora, who leads the statistics.