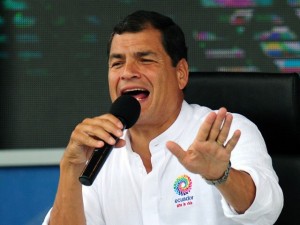 President Rafael Correa criticized on Saturday the claims of Germany for the prohibition of a delegation of German MPs to enter the country, whereby they sought to talk to environmentalists who oppose to the oil extraction in the Yasuní reserve, saying that “colonialism has already ended.”

“They are not coming here to verify anything,” Correa said. “We’re not going to say to them patroncito (dear master in Spanish), come and check. Let them go elsewhere with these stories, there is sovereignty and dignity here (…) there are no longer viceroys here,” he said.

The German Minister of Development, Gerd Müller, questioned that Ecuador would prevent a delegation of German MPs who would meet with environmentalists opposed to the oil exploration in Yasuní, a region with high biodiversity.

Correa also said that his government does not care about the German economic cooperation for social development in the area.