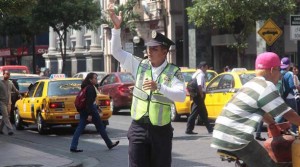 The Minister of Transport, Paola Carvajal, reported yesterday that the entity has resolved, under to the resolution of the Competition Council, continue being responsible for transit in Guayaquil, but it will remove from the streets 300 agents who will be transferred tothe Milagro, Samborondón and Daule counties and the coast highway until Playas. This will be done after the carnival holidays.

Ie, only a thousand agents of the Transit Commission of Ecuador (CTE for its Spanish acronym) will remain in Guayaquil until August,when the extension given by the Competition Council be completed.

Before this, Andrés Roche, General Manager of the Municipal Transit Authority (ATM for its Spanish acronym), argued that if the minister has admitted that “without automation, it exerts until today the control with 1,300 agents, what was the argument with which it sought to reduce this figure to 600 agents?, and what is the new argument which it says now that 1,000 agents are needed?.”

“The Comptroller should ask him why it was paying to 300 agents it now maintains that are unnecessary,” questioned Roche.