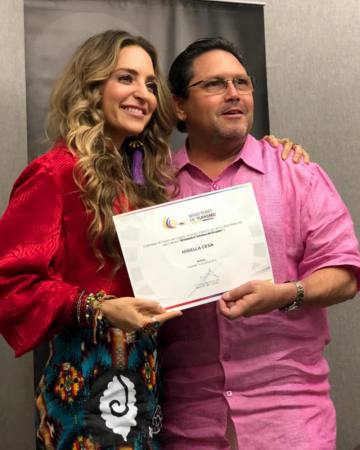 As “tourism ambassadors” were declared the singer Mirella Cesa and the surfer Dominic Barona.

The recognition, which was granted by the Ministry of Tourism, headed by Enrique Ponce de León, is for the “outstanding trajectory and for its contribution in the task of making Ecuador and its four worlds known at a national and international level”.

“This designation is a commitment so that wherever they go they speak well of our country, of the marvelous thing that is our Ecuador”, commented the Secretary of State, who added: “This type of recognition is given to the personalities that in their scope of action are referents of the country abroad. ”

“We are all ambassadors of our country with our attitude (…). The best thing is that each of us, from our work, try to take the name of Ecuador up and invite others to come because we have a treasure and we have to share it, “said Cesa, who received recognition for his contribution to Ecuadorian music and the Silver Gaviota obtained at the Viña del Mar Festival.

Through social networks, Cesa announced that tomorrow her song entitled “Respira” will be released, with the collaboration of Toto González, better known by his stage name Mr. Pauer, a Venezuelan producer.

“With love, I share the cover of RESPIRA. I am super excited!! I’m dying to be heard ! You can pre-order it already !@spotify  @mrpauer we are ready!”, posted the singer from Guayaquil on Instagram. (I)