Monetary Code Draft would endorse transactions only in dollars 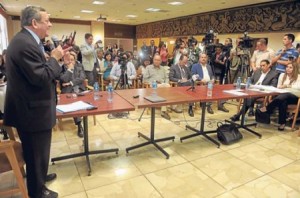 Patricio Rivera, Minister Coordinator of Economic Policy, said the Monetary and Financial Code draft, which will be debated next week in the Assembly, “is not a tool to exit dollarization”.

This clarification was made in response to Cesar Robalino, Head of the Association of Private Banks of Ecuador (ABPE for its Spanish acronym), regarding the document of 516 articles, which is not compatible with the current financial scheme and contains hotly contested aspects with the Constitution, because of considering the banking as a public service.

According to Rivera, the proyect specifies that the financial operations of the bank are made with the dollar as its currency. Article 92 says that “all transactions, monetary transactions, financial and accounting records, in the Republic of Ecuador, will be expressed in dollars of the United States of America”.

Retirees raise their concerns about changes in Biess