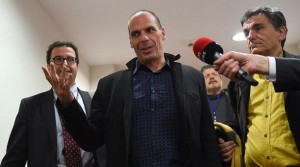 The negotiations between Greece and its partners in the eurozone ended this February 16th without agreement and an ultimatum to Athens this week to ask for an extension of its bailout program.

“It is very clear that the next step should come from the Greek authorities (…) and given the timing, we can use this week but is more or less everything” possible, told at a news conference the president of the Eurogroup, Jeroen Dijsselbloem.

“There is no alternative to request an extension,” said on his part te Commissioner for Economic Affairs, Pierre Moscovici.