New military strategy will be applied on the northern border 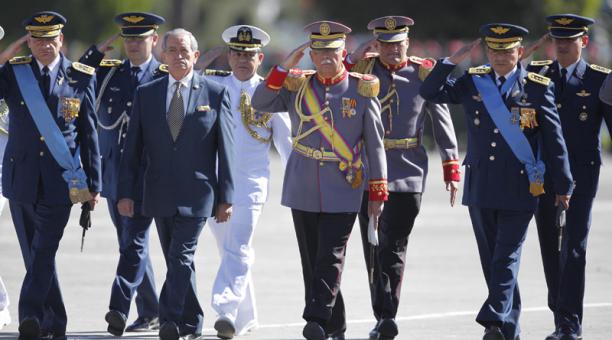 At a slow pace, and dressed in the uniform of the Army, appeared Thursday, June 7, 2018, General Roque Moreira at the Eloy Alfaro Military High School. The officer walked through the Campo de Marte next to the Minister of Defense, Oswaldo Jarrín, and the head of the Joint Command of the Armed Forces, César Merizalde.

It was 09:00 when the Army band intoned military marches to accompany the entry of the authorities. Thus began the ceremony of change of command of the Earth Force. Half an hour later, Moreira was installed as a new Commander of the Army, in front of dozens of uniformed personnel.

In his first speech he referred to the situation of the northern border and said that he already had the means and the personnel for the conformation of the Joint Task Force Esmeraldas. This special unit, which will start operating on Monday, June 11, was created through the Joint Command of the Armed Force  and is part of the new security plan for the northern border.

Precisely, the Army will be the institution that will be in charge of the command of this Force. Therefore, this weekend it is expected that more Special Forces soldiers and elite units will move to San Lorenzo. They will participate in a ceremony in which their specific missions will be defined, but one of the main ones is “to guarantee the sovereignty and territorial integrity of the State”.

This was indicated by Moreira during his speech this Thursday, June 7, 2018. The Joint Task Force will replace the Unified Command, created by the former Minister of the Interior, César Navas, who left the Government due to the lack of results in the capture of the leader of the dissidence Front Óliver Sinisterra.

In that entity, the police also had part of the command. In addition, he was commanded by a Navy officer. Now, with the new Force, the Police will be part of the support but will be limited to the orders of the Army. The institution also appointed Army General Gustavo Acosta to direct military operations on the border cordon. The idea is that through constant control operations, the threats of armed groups that operate between Ecuador and Colombia are faced.

This issue was also addressed this Thursday by the head of the Joint Command. The official gave a speech after the possession of Moreira. In the intervention, Merizalde congratulated the new Army Commander and reported that attacks by armed groups have stopped in recent days. That’s why he sent a thank you to the troops that are on the border. He also gave more guidelines for the Joint Task Force.

According to Merizalde, the mission that the soldiers of this military unit will have will be to create the “conditions that allow state institutions and people living in the border to develop normally.” Since January, when the attacks began, San Lorenzo has been displaced from border communities such as El Pan and Mataje.

They have returned to their homes, but there is still fear. Threats have also been reported to officials of the Office of the Prosecutor and local judges. At the ceremony yesterday, Moreira and Merizalde spoke of the need for the Government to continue with the financial support to the Armed Forces. “It is essential to understand that the units of excellence must have equipment and the necessary technology to guarantee their capacity of deployment in the national territory.”

The new Joint Task Force will coordinate actions with the Special Forces of Colombia. In that country operates the Hercules unit, which today tracks alias ‘Guacho’, who is also wanted by the Ecuadorian soldiers. On Thursday, Minister Jarrin also highlighted the border work. The official was the one who gave Moreira the symbols of Army Commander. Then, he publicly said that the new military chief should be in charge of restructuring and reorganizing the work carried out by the Armed Forces on the northern border. (I)