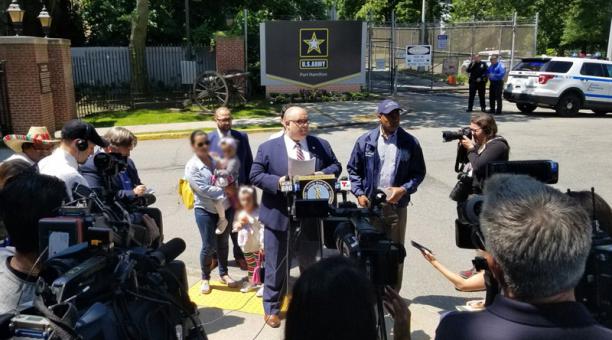 An Ecuadorian who arrived at a military base in Brooklyn, New York, to deliver a pizza was arrested and handed over to the immigration police to be deported because he had no papers.

Pablo is 32 years old, his wife and daughters are Americans and he had already made several deliveries of pizza at the base, located in the southern tip of Brooklyn, according to several local media.

Until now, he had cleared security by showing the identity card of the city of New York, which is granted to all residents, regardless of their immigration status. But in this new installment, last Friday, June 1, 2018, he was asked to sign a document authorizing, among other things, the verification of his background.

The database showed that this father of two girls of two and three years old resided without papers since 2010 in the United States, although a migratory judge had asked him to leave the country in July of that year. The base’s staff stopped him and handed him over to the immigration police, a spokesperson from the police in New York confirmed to AFP, explaining that he is in the process of being deported.

Pablo had already begun the procedures to obtain the “green card” or permission to reside and work permanently, according to the local press. Following the tightening of immigration policy under the Donald Trump government, Immigration police increased its raids in search of undocumented immigrants. Instead of giving priority to those with criminal records or who have committed serious crimes, as under the previous government of Barack Obama, now the goal is to deport anyone without papers, even if that means separating him from his family.

Immigration agents have even significantly increased arrests in courts, until now considered sanctuaries, as well as schools, hospitals and churches. For Justin Brannan, mayor of the municipal legislature for the district where the military base is located, Pablo’s detention points to a change in the position of the armed forces against the undocumented.

“Is this part of Donald Trump’s new deportation strategy? (…) This is absolutely ridiculous. We are destroying families, and for what? “Brannan asked reporters. “Tell me how this is the United States,” tweeted Brooklyn District President Eric Adams, after participating with Brannan in a protest this afternoon in front of the military base.

There were also Pablo’s wife and daughters, who wore dolls. “Tell me how to get Pablo out of the streets makes our nation safer,” Adams challenged. (I)