New Ministers of Foreign Trade and Housing were appointed 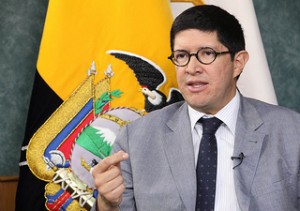 President Rafael Correa, through Executive Decree 585, appointed the replacement for Francisco Rivadeneira, former Minister of Foreign Trade. Diego Aulestia Valencia will be responsible for taking that position, while Maria de los Ángeles Duarte will be the new Minister for Urban Development and Housing.

Aulestia occupied until yesterday the position of Minister of Urban Development and Housing and is an Economist from the Catholic University of Ecuador. He also has a degree in Urban Studies from the Nova University of Lisbon and masters degrees in History, Economics and Economic History at foreign schools; including the London School of Economics and Political Science / Institute of Latin American Studies (ILAS).

Duarte, on the other hand, had been performing leadership roles in the Alianza PAIS Movement in the province of Guayas.

Unofficial sources indicated that other changes the regime will make is in the Coordination portfolio of Production, reason why the ambassador of Ecuador in the United States, Nathalie Cely, would have been called.

Cely have held that position for nearly two years until November 2011.

Facebook page Crudo Ecuador: “this is the end of the line …”