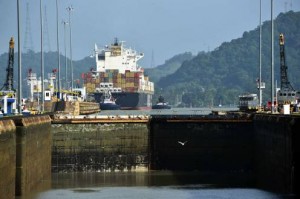 The Panama Canal Authority considers ordering restrictions to ships that cross the waterway if the lack of rain intensifies and lakes continue running low. The restrictions would be sought later this year or in early 2015.

The administrator of the Canal of Panama Jorge Luis Quijano said that there have been months in 2014 with very little rainfall and if that pattern extremely remains, it will force the authorities to impose restrictions.

“We hope it continues raining a little and at least it keeps the water levels where they are right now”, Quijano said.

65 passengers of the Malaysia Airlines fight have been identified