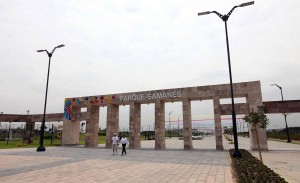 Dozens of retired military were convened Tuesday in La Recoleta park, in front of the Ministry of Defence for the sustainability of the Ecuadorian Institute of Security of the Armed Forces (ISSFA).

The call was made through, social networks. Relatives, pensioners, associations and the Defense Front of the Armed Forces were invited to “defend the worth of the ISSFA and support the military high command.”

The discomfort arose from the recent decision of the Attorney General’s Office to demand that the Ministry of Environment and the ISSFA “rectify the contract of purchase and sale of 66 lots,” located in what is today the Samanes Park in Guayaquil, which was signed in 2010, according to a letter released yesterday by the Defence Ministry.

The Ministry purchased the land for $ 48’220.391,81, an amount determined by the National Office of Appraisals and Land Registries. But now it is stated that, according to Section 58 of the Public Procurement Act, these valuations should have been carried out by the Municipality of Guayaquil, therefore, the ISSFA should return about $ 38 million.